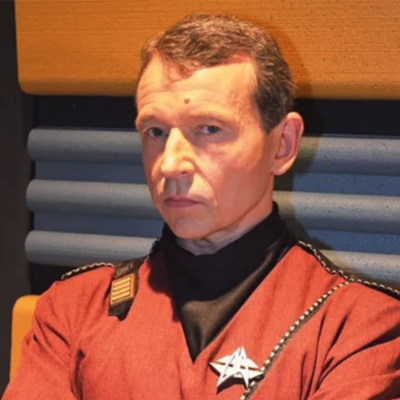 John Carrigan is an actor, fight choreographer, and author whose work has been featured in feature films, television, internet, satellite and Star Trek fan films and projects.

An actor who is at home on both the stage and screen, Mr. Carrigan notably played the role of Kargh on Star Trek: New Voyages (aka. Phase II) in Star Trek: Of Gods and Men (2007) and Star Trek: Renegades (2015).

On a personal note about what Star Trek meant to my life. My father Harry who was a lovely normal man, without warning was struck by paranoid Schizophrenia and just after my birth nearly killed my mother in a brutal attack, after a long time in hospital she survived. Because Harry was her first and only love since childhood she had him back after he returned from a mental asylum, but he was never cured, that began our life of police sieges, straight jackets and terrible trauma.

I turned to Star Trek for comfort to hide from our terrible life, later the Martial arts star Bruce Lee also became a focus for me and Captain Kirk and Bruce Lee became the role models I never had with my poor dad. I had two pictures on my wall, one of Captain Kirk in his chair and the other of Bruce Lee, we had no money no possessions and virtually no hope, but I used to point to those two pictures on my wall and say that one day I will push that button on Kirk’s chair and be an instructor in Bruce Lee’s martial art, of course both those dreams seemed impossible.

I went on to push that button on Kirk’s chair and work on Star Trek, I also became a Master Instructor in Bruce Lee’s art (nothing is impossible) Both those dreams and more began when I was invited to meet Gene Roddenberry and visit the Wrath of Khan sets, Gene looked in my eyes and told me to follow my dreams and as a start he took me to be fitted for a ST Next Generation uniform to have a walk on part, even though I was just a fan in those days and not an actor. I was then invited back to visit Gene on every original series movie set and share some amazing times with him.

My latest impossible dream come true is that for several years now I have flown out to the States to be close protection for William Shatner and also engage in Kirk style stunt fights with him for the fans.