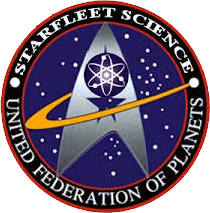 The mission of STARFLEET Sciences is pretty simple: to serve as an informational and communications resource for the Science Regional Division Chiefs, Regional Coordinators, and ship Chief Science Officers throughout STARFLEET. In so doing, we hope to enhance interest in science within STARFLEET’s membership and to promote science education wherever possible.

We live in exciting times! It’s fascinating to see the science-fiction of Star Trek become science reality before our eyes! This is true in so many areas, from personal computers and cell phones to diagnostic medical scanners. Scientists have teleported bits of information from one point in space to another. It isn’t Star Trek’s transporter yet, but it’s the first baby steps toward getting there. Through their Breakthrough Propulsion Physics program, NASA scientists and others are developing the math and theoretical physics necessary for faster-than-light space travel — Star Trek’s warp drive — by surfing space-time!

The history of science is every bit as exciting. Modern science can be traced back 300 years to the beginning of the European Renaissance. But its roots technically go back thousands of years before that, for you see, the Renaissance was essentially a rediscovery of the works of the ancient Greeks. We have explored and continue to explore this rich history through a series of articles for the Starfleet Communique and this web page, which ships and regions may reprint in their own newsletters.

Science functions best when it is unencumbered by politics. It took centuries for science to become free from the tyranny of the political and religious dogma of Medieval Europe. Recently, science has come under attack once again.

This web site is frequently updated with current information. The active links to the left will get you to pages that have content, and the inactive ones will be populated soon.

We’re always interested in learning new things, especially how we can improve this web site and the Starfleet Sciences Program to meet your needs. If you have a suggestion, send Starfleet Sciences Fleet Director, Vice Admiral Richard Heim, a note. He’ll be happy to hear from you!